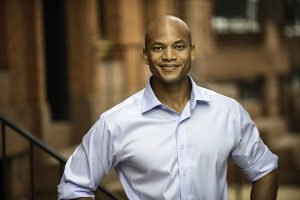 ALBANY, NY – The Sage Colleges is pleased to welcome author Wes Moore to its Sage College of Albany campus on Friday, September 16, 2016 at 7 p.m. in the Armory at Sage located at 130 New Scotland Avenue.

Wes Moore is a youth advo­cate, Army com­bat vet­eran, social entre­pre­neur, and host of “Beyond Belief” on the Oprah Win­frey Net­work. His first book “The Other Wes Moore” became an instant New York Times and Wall Street Jour­nal bestseller and shares the lives of two individuals with the same name but two very different fates.

Born in 1978, Moore and his sis­ters were raised by their wid­owed mother. Despite early aca­d­e­mic and behav­ioral strug­gles, he grad­u­ated Phi Theta Kappa in 1998 as a com­mis­sioned offi­cer from Val­ley Forge Mil­i­tary Col­lege, and Phi Beta Kappa from Johns Hop­kins Uni­ver­sity in 2001, where he also played foot­ball and earned a bachelor’s degree in Inter­na­tional Rela­tions. Moore then became a Rhodes Scholar, study­ing Inter­na­tional Rela­tions at Oxford University.

After his stud­ies, Moore, a para­trooper and Cap­tain in the United States Army, served a com­bat tour of duty in Afghanistan with the 1st Brigade of the 82nd Air­borne Divi­sion. He then served as a White House fel­low to Sec­re­tary of State Con­doleezza Rice. Moore serves on the board of the Iraq Afghanistan Vet­er­ans of Amer­ica (IAVA), Johns Hop­kins Uni­ver­sity, and founded an orga­ni­za­tion called STAND! that works with Bal­ti­more youth involved in the crim­i­nal jus­tice system.

Moore is com­mit­ted to help­ing the par­ents, teach­ers, men­tors, and advo­cates who serve our nation’s youth. A por­tion of all book pro­ceeds for “The Other Wes Moore” are being donated to City Year and the U.S. Dream Academy.

At the conclusion of his lecture, Moore will host a book signing. Register for the free lecture at www.sage.edu/event/wes-moore/.  Follow Moore on Twitter: wesmoore1 and
Facebook: www.facebook.com/IAmWesMoore. See More at WesMoore.com.