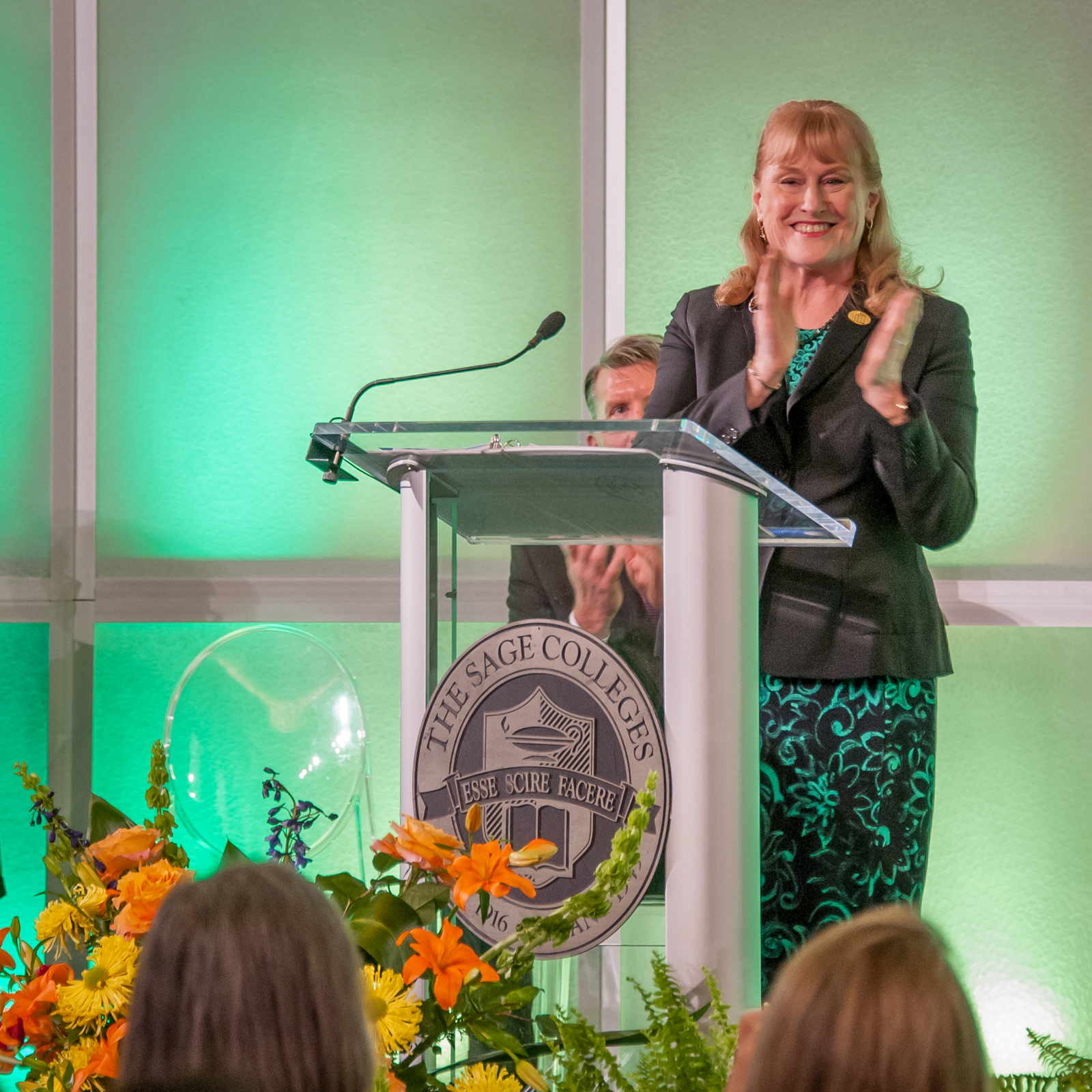 TROY, NY – The Sage Colleges announced the public phase of its capital campaign during a special recognition event this afternoon on the Russell Sage College campus in Bush Memorial Center. Over 100 donors, administrators, faculty, staff, students, elected officials and community members attended the event which included a celebratory champagne reception.

“This is an exciting time as The Sage Colleges prepares for our upcoming Centennial celebration in 2016,” explained Susan Scrimshaw, president of the Sage Colleges. “I am overwhelmed by the generosity of our donors. As of today, we have raised nearly two and a half times more than we have raised in any previous campaign, and are well on our way to our overall goal of $50 million.”

Leadership gift fundraising for the campaign began in July of 2011. To date, Sage has raised $40 million and is working to raise another $10 million. Over 83% percent of the gifts have been made by Sage alumni and there has also been 100% participation by Sage’s board of trustees.

Donna Robinson Esteves, Russell Sage College ’70, is the Centennial Campaign’s chair and lead donor, providing the keystone gift of more than $10 million — the largest in the college’s history. “I really enjoy being an active part of this remarkable, historic campaign,” said Esteves. “As all of us anticipate the Centennial of The Sage Colleges, we celebrate the legacy of this incredible institution.  And we can transform its future by helping ensure its academic excellence for coming generations.  Each gift makes a magical difference and every gift will have a joyous, lasting impact. It only takes one to make a difference.  Be that one.  As Walt Disney said, ‘It’s kinda fun to do the impossible!'”

Gifts from the quiet phase of the campaign have been used to support academic programs, for facility renovations and upgrades, and for endowment for faculty and campus needs. In fact, gifts to support scholarships and academic programs have helped to increase the Sage endowment by over 30 percent. Improvements have also been made to a number of campus facilities including the Esteves School of Education which was named in honor of Donna Esteves. The Esteves Science Hall, the Health Sciences SIM Center, the Armory at Sage, the Manor Nutrition Lab and the Shea Learning Center are other projects which have benefited from the campaign.

Remarks were also made by Nelson “Tip” Simons, chair of the board of trustees. New York State Assemblyman John McDonald III and Rensselaer County Executive Kathleen Jimino were also in attendance.