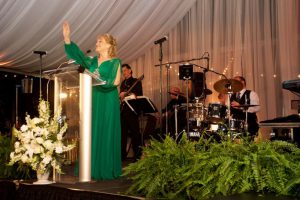 Friday was a landmark day for 100-year-old Sage Colleges with news it exceeded its Centennial Campaign goal, dedicated a sculpture for the birthday and announced the renaming of a building in honor of its president.

More than 500 administrators, staff, alumni, community members and elected officials were scheduled to join The Sage Colleges Friday evening to celebrate its centennial at a black tie gala at The Armory at Sage.

Board of Trustees chair Tip Simons announced that Sage will rename Ricketts Hall on the Troy campus, home of the occupational and physical therapy programs, as Scrimshaw Health Sciences Hall, in honor of President Susan C. Scrimshaw, who has led the college since 2008. Scrimshaw said in June she’ll be stepping down in June 2017.

“Her leadership, wisdom and hard work have positioned Sage for a new century of unlimited possibilities,” Simons said. Scrimshaw is also a medical anthropologist who has authored five books and numerous journal articles, book chapters, and reports. 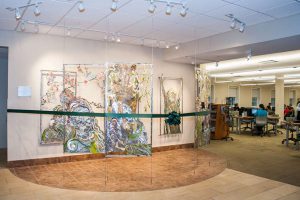 The sculpture dedication took place at Shea Learning Center on the Troy campus. “Celebration” was created by sculptor Kathryn Field and includes steel and painted images of Russell Sage College students based on photography from Sage’s website.

It is a gift from Russell Sage College alumna, The Sage Colleges Board of Trustees member, and Sage’s Woman of the Century Donna Robinson Esteves.

A centennial sculpture for the Albany campus was unveiled in April just outside of the Opalka Gallery. “Inner View Nexus Open I” was sculpted by Caroline Ramersdorfer and was a gift from Chet and Karen Opalka.

Read the full article on the Times Union website.