Assemblyman John T. McDonald and State Senator Neil D. Breslin introduced a resolution at the State Capitol on January 26, 2016 honoring Sage’s 100th anniversary. President Susan C. Scrimshaw and The Sage Colleges were recognized as the resolution was passed by both houses of the legislature during their respective sessions.

“LEGISLATIVE RESOLUTION commemorating the Centennial of The Sage Colleges

WHEREAS, It is the custom of this Legislative Body to acknowledge
significant milestones and celebrate events of historical significance
which have a lasting impact within and beyond the communities of the
Empire State; and
WHEREAS, Attendant to such concern, and fully in accord with its long-
standing traditions, it is the sense of this Legislative Body to commem-
orate the 100 year celebration of The Sage Colleges, recognizing its
commitment to helping generations of students in their pursuit of
academic excellence and empowering them through their education to make
a difference in their communities; and
WHEREAS, Russell Sage College was founded in Troy, New York, in 1916,
by Margaret Olivia Slocum Sage and named in honor of her late husband,
who had left her his considerable fortune; with Eliza Kellas, head of
the Emma Willard School, Mrs. Sage was active in the women’s suffrage
movement; and
WHEREAS, In founding the new College, they proposed to offer women the
means of independence through the combination of broad education in the
liberal arts with preparation for specific professional careers; and
WHEREAS, In 1942, Sage conferred its first graduate degree and during
World War II, an “emergency men’s division” was created to serve veter-
ans returning from service seeking an education; and
WHEREAS, In 1949, an Albany Division was opened extending the
College’s mission to include the education of men on the second campus;
Sage Junior College of Albany received its own degree-granting powers in
1957; and
WHEREAS, In 1995, Sage Graduate School became authorized to grant
graduate degrees, Sage Evening College became recognized as a separate
administrative unit; and the institution was re-chartered by the Board
of Regents of the State of New York as The Sage Colleges, often referred
to for the sake of convenience as Sage; and
WHEREAS, The name Russell Sage College now refers only to the Troy
campus for women; in 2001, Sage Junior College of Albany and Sage Even-
ing College were combined into a single, coeducational, four-year degree
granting entity, Sage College of Albany; and
WHEREAS, In 2009, Sage restructured Sage Graduate School around three
key areas of strength and expertise to create the donor funded Esteves
School of Education, School of Health Sciences, and School of Manage-
ment; and
WHEREAS, Interdisciplinary academics, community engagement, interna-
tional exposure, and artistic and athletic endeavors are among the
pillars of the educational experience at The Sage Colleges, which has
37,000 living alumni and currently enrolls more than 2,900 students; and
WHEREAS, Today, The Sage Colleges consists of Russell Sage College in
historic downtown Troy, New York, a comprehensive four-year college for
women offering bachelor’s degrees in the liberal arts and sciences as
well as professional fields; and the coeducational Sage College of Alba-
ny, in our capital city, offering bachelor’s degrees and practical expe-
rience designed to prepare students for the careers of today and tomor-
row; and
WHEREAS, Through its School of Professional and Continuing Education,
Sage offers bachelor’s degree completion programs designed for busy,
working adults; Sage’s graduate-level schools – Education, Health
Sciences and Management – are coeducational environments offering
advanced study for professional practice and leadership through master’s

degrees, post-master’s certification in a wide variety of applied disci-
plines and doctoral degrees in professional disciplines; and
WHEREAS, They serve both recent college graduates, including Sage
students in accelerated bachelor’s/master’s programs, and individuals
already at work in their professions; students can also pursue select
bachelor’s, master’s, and certificate programs online through Sage
Online; and
WHEREAS, Under the banner of The Sage Colleges, these institutions
coexist within a small university model institution to educate and to
transform lives by maximizing opportunities for students and, since
2014, offering a wider range of majors to all students on both campuses
through cross-college enrollment while also ensuring that Russell Sage
College is preserved and strengthened as a women’s college leader and
model; and
WHEREAS, In addition to its highly regarded academic programs, The
Sage Colleges is also proud of its thriving athletics program and arts
venues; Sage now offers 15 intercollegiate sports at the NCAA Division
III level and is also home to the Theatre Institute in Troy and the
Opalka Gallery and Little Gallery in Albany; and
WHEREAS, The Sage College’s motto “To Be. To Know. To Do.” expresses
the timeless imperatives that underscore Sage’s values of self-discovery
and excellence, the rigorous pursuit of knowledge, and the responsibil-
ity to engage in meaningful and constructive ways in our local,
national, and global communities; and
WHEREAS, For its ambitious Centennial capital campaign and year-long
celebration, The Sage Colleges has added the word “MORE” to a bold,
modernized version of its motto “Be. Know. Do. MORE” to emphasize all
that has been and continues to be accomplished and to pursue aspirations
of continuing growth; and
WHEREAS, With the skillful leadership and innovative vision of its
President Susan C. Scrimshaw, Sage will step creatively and ambitiously
into the next century with MORE imagination, MORE innovation, MORE
opportunity, MORE engagement and MORE of what has made The Sage Colleges
a pillar in higher education and in the local, national and global
communities its students, faculty and staff have positively impacted;
and
WHEREAS, The Sage Colleges will continue to grow and evolve and carry
on its mission to educate and transform lives for another 100 years and
beyond, and continue to equip students to become individuals of influ-
ence and agents of change in their communities; now, therefore, be it
RESOLVED, That this Legislative Body pause in its deliberations to
.SO DOC S R3263 RESO TEXT 2015
commemorate the Centennial of The Sage Colleges; and be it further
RESOLVED, That a copy of this Resolution, suitably engrossed, be tran-
smitted to President Susan C. Scrimshaw, The Sage Colleges.” 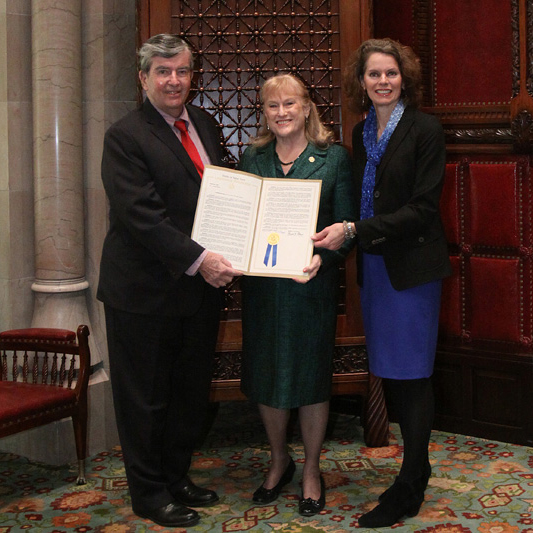